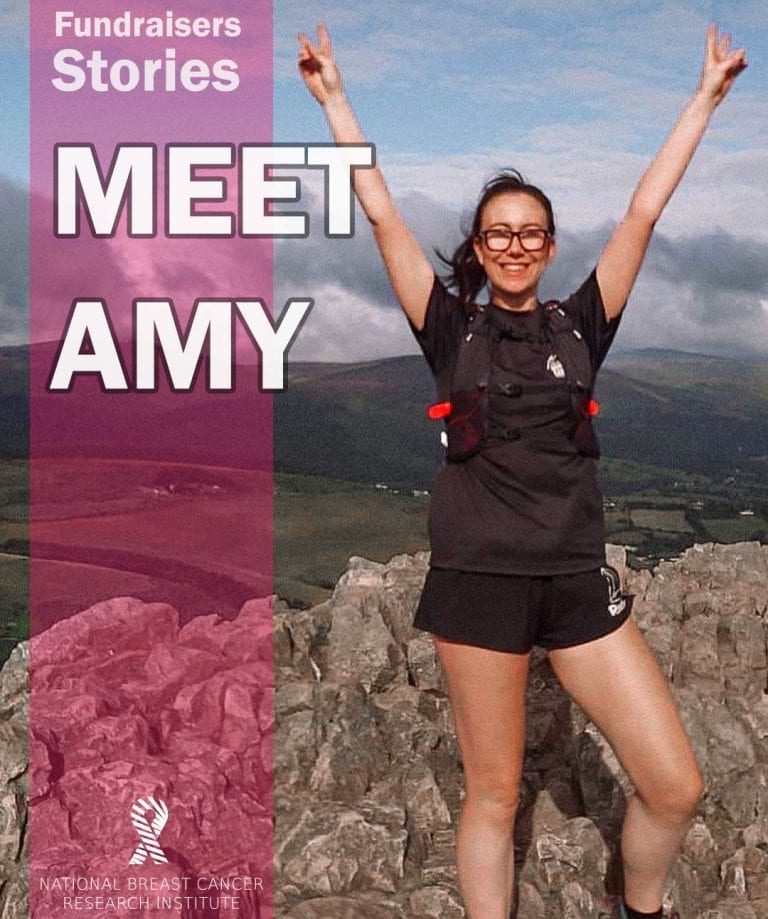 Meet Amy Martin, Amy was to take part in the Seven Sisters Skyline Challenge this Saturday but unfortunately, the event is now cancelled. Regardless Amy will still take on the challenge for the National Breast Cancer Research Institute with her husband. She will still do the 25km in the same location just without the aid stations and people to cheer her on, making it even more of a challenge.
We want to thank Amy and her husband and wish them both all the best for this Saturday. Amy knows why research is important.

Last year was a strange year for me – while I was preparing to sit the most important exams of my life and trying to plan a wedding, I found a lump in my breast, I went to the doctor to get it checked and he assured me that it was too small to be anything to be worried about but he would refer me to the breast clinic in St James’ Hospital “just in case”, He told me that due to my age (26) and the size of the lump (approx 2cm), I shouldn’t be worried and it was unlikely that I would even need an ultra sound never mind a biopsy unless “there was something to be worried about”.

After attending the breast clinic in St James’ Hospital, the doctor told me that, because of my age and the size of the lump, I shouldn’t be worried but that I should have an ultrasound “just in case” but I would only need a biopsy if “there was something to be worried about”. The doctor explained that the lump was likely just a build-up of fluid which could be removed with a small needle but she highly doubted it would need to be removed at all. Of course I thought the worst!

A few weeks later I had the ultrasound and the lump was solid, not fluid-filled as they suspected and I was scheduled for a biopsy “just in case” but was assured that I would only need to have the lump removed if there was something to be worried about.

I attended for the biopsy a few weeks later and a second, smaller lump was found – not the news I wanted to hear but the doctor assured me that he didn’t think there was any reason to worry – of course, I panicked!

The biopsy results came back and the cells in the lump were “abnormal” but I DID NOT HAVE CANCER – however, the lump would need to be removed before it turned into something “more sinister”. The doctor explained that while I did not have cancer yet, there was a strong possibility that, unless it was removed, the lump would develop into a cancerous tumour.

The lump was removed on 16 August 2019 – almost 1 year ago to the day when I will run the ‘Seven Sisters Sky Challenge’.  If you’re worried about something, then go to your doctor. Just because you are young, fit, healthy or have never been sick in your life does not mean you are immune. Better safe than sorry girls, get checked!  Amy

If you would like to support Amy her GoFundMe Page is:

Our Board and Team